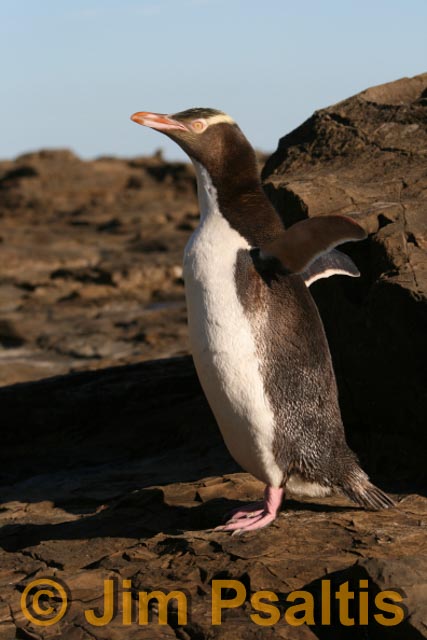 This photo of a yellow eyed penguin was taken on a beach on the South Island of New Zealand along the Catlins coastline. There are many attractions along this well known coast and it forms part of a tourist drive. Yellow eyed penguins are native to this part of the world and are under some threat from habitat changes. They are on the red list of endangered species.
I waited patiently on the shore, until a returning bird emerged from the sea and made its way tentatively up the beach. All tourists are warned to keep at least 30 metres from the penguins and not to get between the sea and their burrow which is usually up above high water mark.
This particular day I thought I was doing the right thing but of course the penguin didn't see me as I lay on the rocks expecting to shoot a bird in the far distance. I was more surprised than the penguin as it came closer and closer to where I was lying. So I did what any self respecting nature photographer would do I; kept on shooting as it came nearer.
This is the result of a close encounter.
Eventually I was asked to move back by one of the volunteer rangers that inhabit the beach to protect these beautiful birds. Of course I complied but the only inhabitant that seemed totally unconcerned was the penguin!